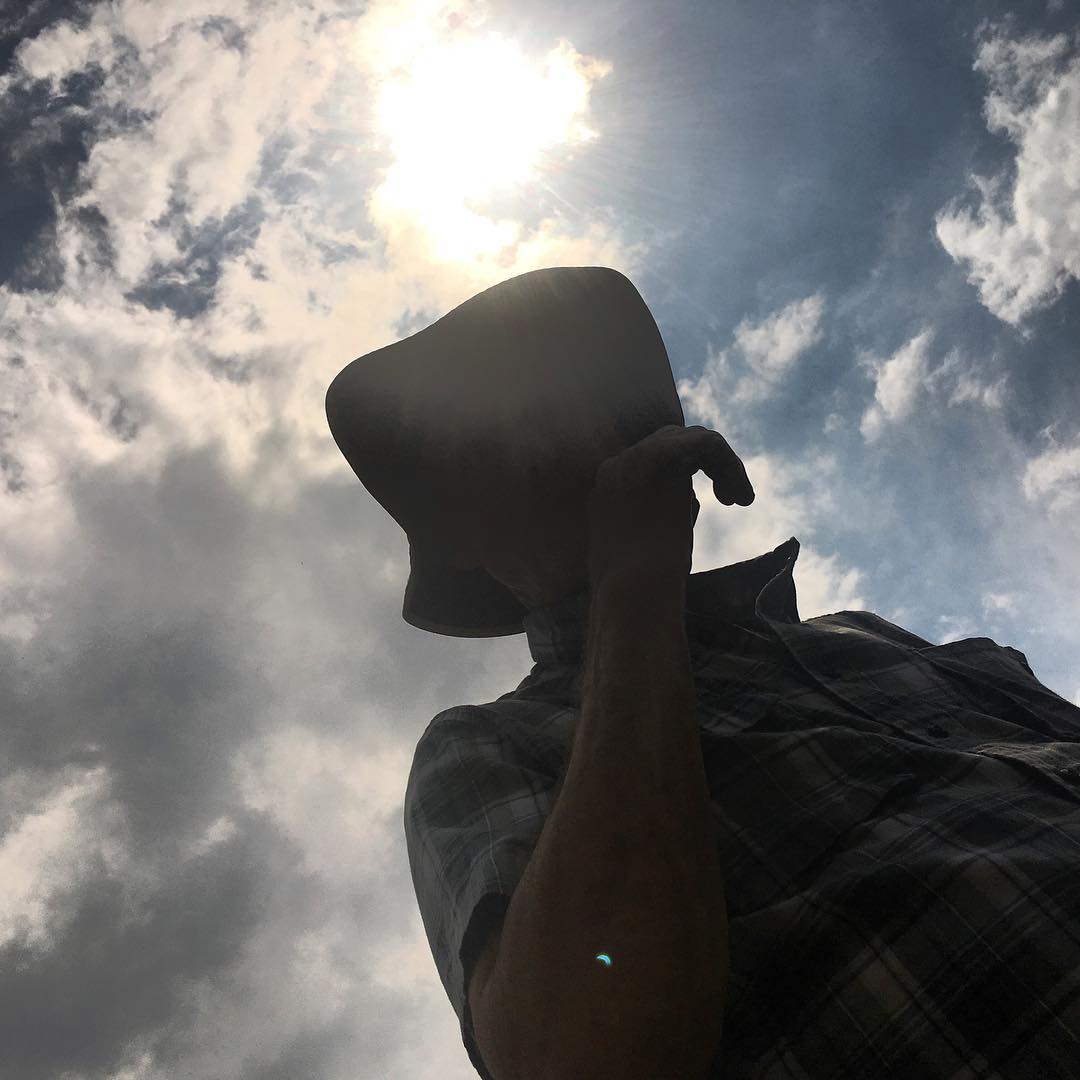 For me, the Great Eclipse of 2017 was a tiny three-minute night, tucked into in the middle of a 30 hour-day spent, for the most part, traversing 1,400 miles with a speedy red Ford Mustang convertible.

I would not recommend driving 1,400 miles in a single stretch, btw. But if you must do it, it helps to have a speedy set of wheels.

Our goal was to experience the eclipse in its entirety, to get under the path of total darkness as it cut a swath across the United States on August 21, 2017.

We were not sure what to expect, but we heard it would make an impact on our lives somehow, our planet slipping ever-so-momentarily behind the dark side of the moon. The closest point of such totality was at least 500 miles south of us. Others had made plans, procured camping spots and sleeping bags for the night before. Our schedules, and lack of planning, afforded us no such luxuries.

We did have tentative plans for the eclipse too, my high school bud Steve and I, involving camping in North Carolina by the beach. But those plans fell through, mainly because we failed to make reservations at any campground, or hotel, before everything anywhere near the total eclipse sold out (like months before). But our friend Michelle advised that we needed to be under “The Path of Totality.” It’s a life-changing experience. The “Path of Totality” (POT) was the swath of darkness that passed overhead when the moon was fully eclipsing the sun. In the United States, it would stretch from Oregon and break southeast across the states towards North Carolina, the general area closest to us east coast folk. For a moment, day would turn to utter night. Things would be different, however momentarily. Being at, say the 80 percent totality just wouldn’t get it, the algebra of the cosmos dictated.

The math also dictated that, given that I was in NYC and my friend Steve was in Western Maryland, the quickest way we could get to the Path of Totality would be straight down that long hilly stretch of road through Virginia, I-81, aka. “Death Highway,” nicknamed for the all hazardous material that trucks down that road that can’t go through the city tunnels on I-95.

~1,400 miles in 30 hours: Wouldn't recommend it, but it helps to have a speedy set of wheels... #roadtrip from #NYC/#Finksburg to #BurrellMountain #NC for the #pathoftotality2017 #donuts #jesus #AluminumSiding #PinkFloyd #midlifecrisis #musclecars #TurnItUp

And, because the whole trip had to be done during a single (elongated) day, the inescapable conclusion we arrived at involved temporarily procuring a quite speedy red Ford Mustang, a convertible, the likes of which could carriage us swiftly down Death Highway, making a left-hand turn for Asheville, North Carolina, which was but a few miles north of the Totality. That was it. That was the plan: Drive to Asheville. See the eclipse. Drive back in time to get ready for work the next morning.

I picked up Steve around midnight of the day of the eclipse, he with the cooler filled with beer for the destination. So we basically had 10 hours of driving to do by noon the day of the eclipse. The idea was that one would drive while the other slept, though who could sleep on such a momentous day? Especially not when we dropped the top to enjoy the crisp southern Virginia morning at about 80 mph, with the Dead and the Floyd cranked to maximum volume.

We made it to Asheville with a bit of time for breakfast. So we hit up my fave food joint of the town, Tupelo Honey (Real Talk: Check the Pecan Pie French Toast). Umm, so, we didn't really have a plan beyond getting to Asheville, the closest town along the Path of Totality though still 40 miles outside the path, which cut across the North Carolina mounatins. Google Maps showed that the roads into the nearby Nantahala National Forest were jammed with traffic. The nearest open road skirted the east side of the mountains to Brevard. We never heard of Brevard, and I suspect that if you've lived 40 miles or more from Brevard, you've probably never heard of it before.

“What do we do now?” Steve asked as I slowly drove along the main street of Brevard, only minutes before the eclipse would begin. I wasn’t even sure what we were looking for, driving around the side streets randomly. “Here, just take a right, go into the mountains,” he said. We turned onto a crumbling asphalt road that seemed to snake up into the mountain. As we ascended, the road shrank into a single set of gravel tire tracks, the houses thinned out, the trees grew thicker, and hung lower, the drop-off to the sides grew more severe as the grade steepened.

Finally, the Stang nosed onto a small plateau alongside a lake with just clearing enough to see a snatch of the sky. The road ended here, at a gate leading into some private property. With literally a few minutes to spare, we pulled out the cooler and were just sitting our fat asses back down onto our fold-out chairs, when this friendly country hippie opens up the gate and says howdy.

Howdy, we say back, somewhat nervously because we're not sure whose property we were on. But the fella, Michael James his name turned out to be, just wanted to say hello. In fact, Michael's own people had gathered on this family spread to the eclipse, which ran alongside the lake adjacent to where we stationed ourselves.

Michael wanders off, but returns a few minutes later and invites us in, with the rest of his party here on what they call Burrell Mountain. We happily agree. Although the eclipse started a little after 1 PM, not much obvious change was evident in the sky for a full hour afterward, as the moon slowly started to cut into the sun’s mighty rays. Daylight still filled the mountainside, a testament to the sun’s immense energies. Partially truncated, the light only seemed a bit thinner, somehow, more severe somehow.

#nature getting busy in the lingering moments before the moon blocked out the sun. Plus watch til the end for a special #eclipse2017 message from #BoySteve. #BurrellMountain #northcarolina #totaleclipse #pathoftotality2017 #TotalityRoadTrip

These friendly folk had quite a spread, and we wandered around looking for tell-tale signs that nature's simpler creatures being fooled into thinking it was the end of the day. Hummingbirds needled flowers with extra vigor. Crickets started in on their evening chirps. Before long, the place started to sound like a bird sanctuary. I was trying to capture all of this pecular animal kingdom activity on my iPhone, when Steve lurched up and bellowed "Squirrel Nut Zippers." The moon was making everyone cray-cray.

As time grew closer to the four-minute period when we would be directly behind the moon, people started talking more hurriedly, and the velocity at which darkness crept over all noticeably increased, to the point when it got even darker in the time it would take so say out loud how dark it was getting. Then it was completely dark. A few people left their car headlights on, and for a few seconds these beams were the only things you could see on the ground, though if you looked above the tree line, the sky still appeared blue, punctuated by the occasional fluffy cloud. This video below shows shows the totality of the totality, how quickly it grew dark, and how quickly light came over the land again (Click to play):

...And like that, it was daylight again, and we were sweltering in a just-another-hot August afternoon. And we had hundreds of miles to drive to return to our homes. The cosmos had returned to its scheduled programming, leaving only an ephmeral, if momentous, eruption of the planetary routine to remind us all that we live in a universe way beyond the scale of our daily lives. Life-altering indeed.