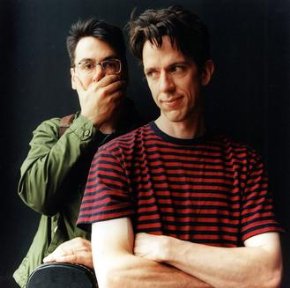 After finishing up their fourth LP, John Linnell, who plays accordion, and John Flansburgh, who plays guitar and wears glasses, were in a quandary for an album title. Flansburgh suggested Apollo 18, thinking of the Apollo 17 spacecraft, which successfully completed NASA's last moon mission in 1972.

"This is our sort of miniature moon mission," Linnell explains. "I think he liked the name because it just seemed open-ended."

Being resourceful lads, Jim and Jim of They Might Be Giants decided to seek out some space photos to use as artwork for the album. So they left Brooklyn and traveled down to the NASA Archive Center in Washington D.C. There, they searched through thousands of photos stored on laser discs, pulling out the ones they thought might look good for the CD cover.

Linnell elaborates, "We managed to get a lot of pictures. There are all sorts of really nice color photos on the on-the-earth testing sessions. Like there's some people on a plane, the plane is in a free-fall, so they're just sort of floating.

"Then there's this really nice color photo of the astronauts testing the car they drove around the moon. You can't really see where they are except they're wearing spacesuits and behind them you can see clouds and the blue sky. We thought that looked pretty nice."

"Eventually, I guess they started wondering who we were and why we were there. So we said we were in this band, we're making this record, and we're going to start touring next year," Linnell recalls.

"We don't have a super clear idea of what it is we're supposed to be saying about it," Linnell says.

Given the title, one would assume Apollo 18 would be chock full of songs about space or spaceships or moonrocks or something of that sort. I asked how many songs on the album actually had to do with space.

"Ah," Linnell reflects, "I'd say roughly none of them."

"There's a couple of songs that have either the word space in them or suggest space," Linnell adds helpfully. "But it's not really like an album about space."

"It's pretty tangential," he admits.

But the Giants usually manage to work the tangential to their advantage.

"We're supposed to be included on lists of events happening in connection with International Space Year," Linnell elaborates. "In other words, on a particular month they'll say in some town there's this lecture about space telescopes and then there's this They Might Be Giants concert. It does seem kind of of weird--disconnected to us."

Imagine, if you will, a young unsuspecting space buff showing up to a They Might Be Giants concert. How will she react to their quirky but loud oeuvre? The mind boggles.